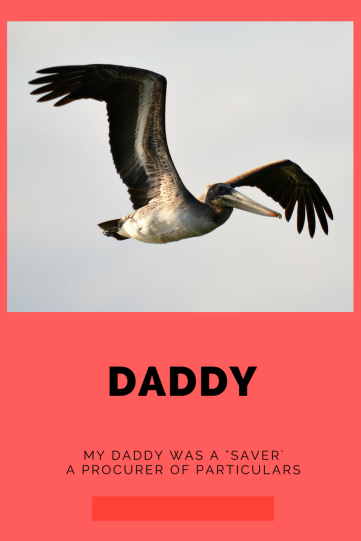 My Daddy was a “saver”.  A procurer of particulars…a frugal forager.  It was probably because he was a product of the Depression, but for whatever reason, if you needed ‘it’, he had it, at least one and perhaps an alternative.

However, when he died, I saw this tendency to save and how far reaching its depth.  When Daddy passed away we found many souvenirs, balls of twine, ink pens, jars of nails and business cards.  We found his report cards, measuring tapes, hundreds of bank statements and thousands of photographs labeled neatly into chronological albums.  There were boxes, bags and myriad other containers full of mementos of his life.

My brother and I waded through his things sometimes laughing …sometimes crying.  Towards the end of our sorting, we bantered across to each other, “You take it!”  “No, YOU take it!”  Still, we filled large, black Hefty bags with things to give away or dispose of.  His obsessive ‘saving’ wore us out.  Sometimes, as we discarded, I whispered a prayer, “I’m sorry Daddy, we just have to let this go,” in hopes that he understood.

Last year I was going through a box of Daddy’s things that I had ‘saved’ seven years ago.  When I brought it home, I thought these were all things I would go through right away and look at often.  But, seven years had gone by and I had just found the strength to open the box.

Inside of this box were our report cards, Baptism announcements, college essay’s, school pictures and more.  I found an old, faded manila envelope, 8 ½ by 11, sealed with a piece of tape.  Enclosed, were letters and cards my brother and I had sent Daddy through the years; Father’s Day cards, poems, and notes we had written him and behind those were a clump of letters tied with a string….our letters to Santa Claus.

As I unfolded this one pristine piece of notebook paper, I was transported, as I read my childish handwriting proclaiming my goodness all year and a love for a certain red cowgirl outfit.  Not all of our letters to Santa were saved, but a few were obviously chosen to be put away and remembered.

My Dad wasn’t always good at saying he loved us.  He wasn’t the sentimental, huggy, mushy type.  But, after he was gone, I saw his tender side amongst the 14 retractable measuring tapes and boxes of Navy war memorabilia.

There were cards and notes his children had sent and precious letters to Santa that must have touched his heart.  Suddenly, all of this stuff he had ‘saved’, became a piece of him…a bridge to the other side, where he was standing, arms open wide, saying, “See?  I love you.  I always loved you.”  And my heart sang back, “I know.  Happy Father’s Day, daddy.   I love you, too.”